Your History Is His Story

The best of your past can be the boost for your future.

My thoughts today are, “your history is His story.” 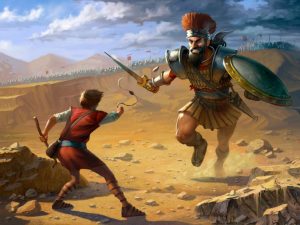 We have been looking at Psalm 23 the previous weeks. And we will return to David’s psalm, but we should pause and look at the man, rather than his words. After his public devastation of Goliath, he had some street cred to review.

David and Goliath are a favorite story of mine. Against all odds, David achieved monumental success. Would you like to know his secret? Solutions and success to challenges are seldom simple. Consider the example of David and Goliath. Read 1 Samuel 1:7.

A shepherd boy courageously challenged a seasoned warrior and a towering giant as well. Almost as a footnote, the Bible records, “David chose five smooth stones from the stream and he put them in a shepherd’s bag.” 1 Samuel 17:40 NIV. What an odd piece of information in such a dramatic situation.

Ever curious why David selected five stones? The Bible does not explain, which allows us to consider why he might have done so. Apart from God, five ordinary stones are not much more confidence-building than one.

If you are serious about succeeding, consider more than one way to achieve your goal. You need the attitude of, “Whatever it takes!” Maybe David chose five stones because he did not know which one God would direct to its mark.

I suggest “five stones” that contribute to your meaningful accomplishments.

My prayer for you today is to experience the satisfaction of your best efforts.